With the season-long points race of the 2016 UCI Mountain Bike World Cup presented by Shimano behind them, elite downhill racers prepare for the biggest race of the year when Val di Sole, Italy hosts the 2016 UCI Mountain Bike World Championships, live on Red Bull TV September 11. Rachel Atherton (GBR) heads to Italy with a perfect season, the 2016 overall World Cup title, and an unprecedented 13 consecutive victories to her name (including wins from last season). For Aaron Gwin (USA), the 2016 men’s elite overall world cup winner, Val di Sole is a chance to claim his first-ever World Championship.

Nestled in the Dolomite Alps Mountain Range in Northeastern Italy’s Trentino province, Val di Sole hosts the UCI Mountain Bike World Championships for the first time since 2008. A scenic three and a half hour drive from Milan, Trentino is one of Italy’s wealthiest regions filled with historic forts, hamlets and churches, year round mountain recreation and water sports along the rapids of the Noce River.

With a 519 m (1,703 ft.) vertical drop and a 21% average descent, the 2.2 km (1.4 mi) downhill track presents riders with one of the shortest, fastest, most intense challenges of the season. All eyes will be on the skies as teams arrive and prepare for race day; the steep and technical track is slippery and dangerous when wet.

Last year at the World Cup finale, the daunting Wall section took out Greg Minnaar (RSA) who ended up finishing 51st. The Mickey Mouse section is next, filled with straight lines and roots. The Snake is a twisting wooden bridge that is extra dangerous when wet. Teo’s Dog Stone is a steep drop with lots of lines, roots and trees. The Hell is a quick descent that elevates the drama with steep turns, big rocks and roots. Pippo’s Jump is a step down before a sharp turn leading riders out of the forest and into several jumps before the finish line. 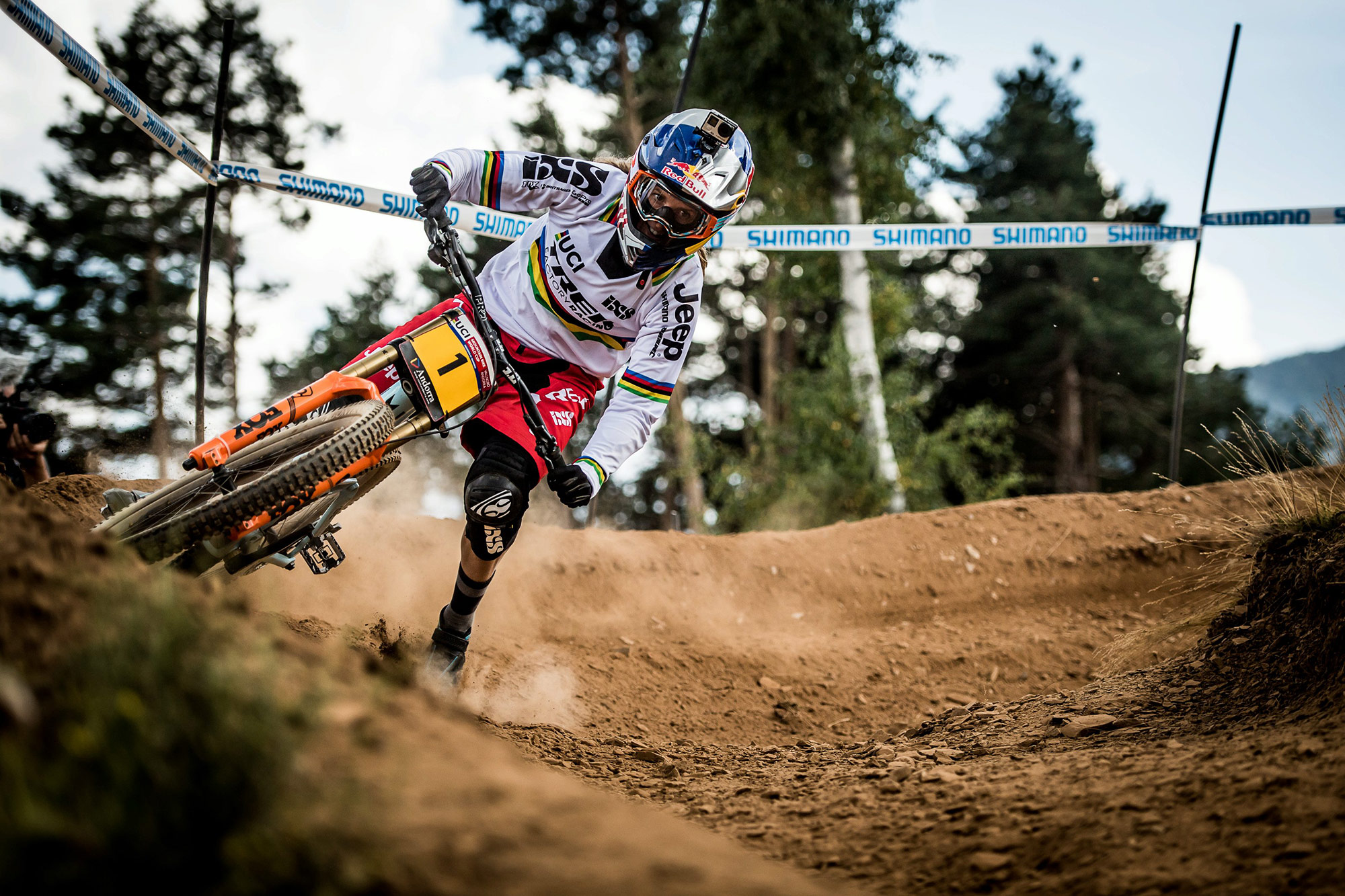 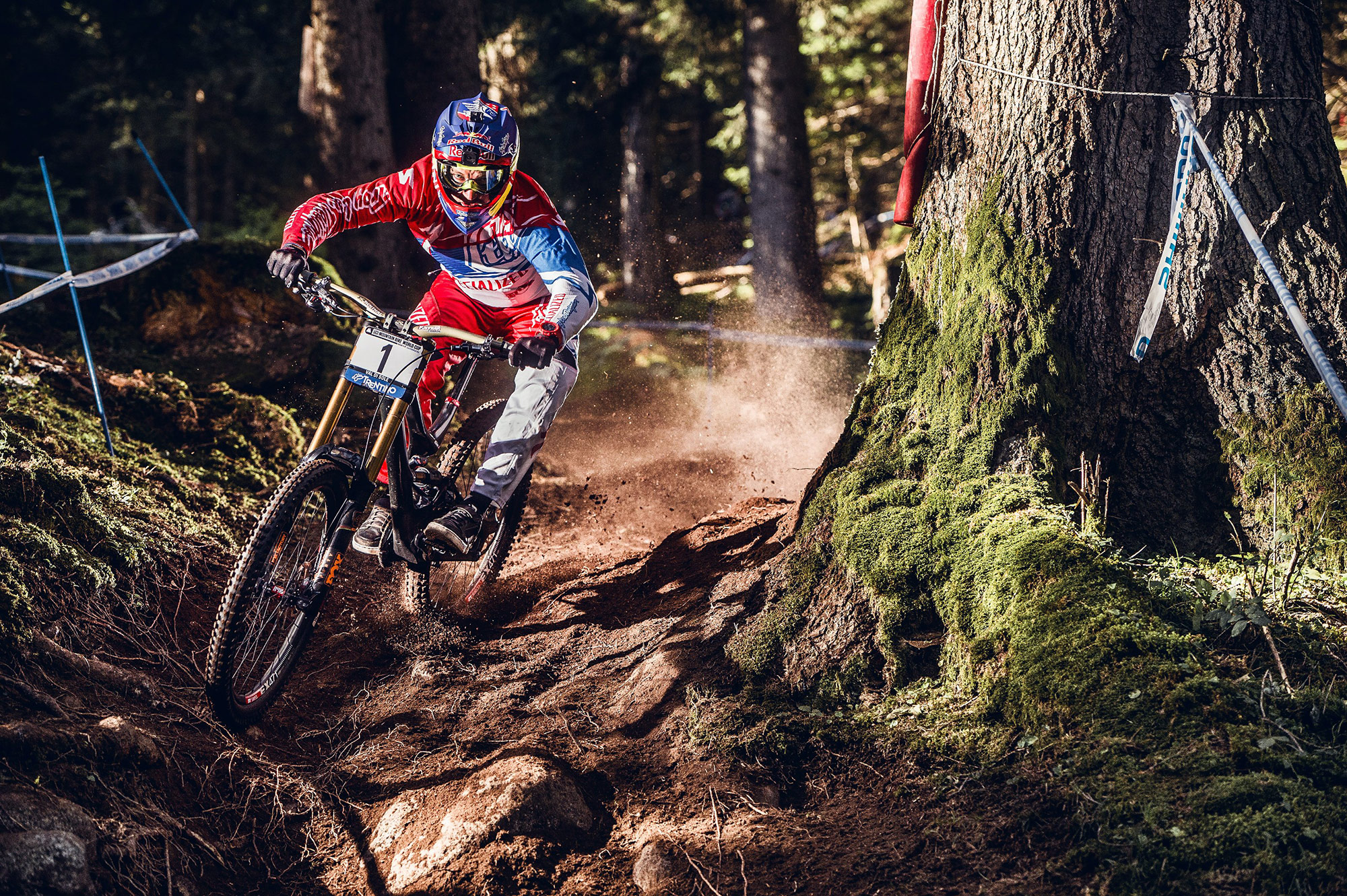 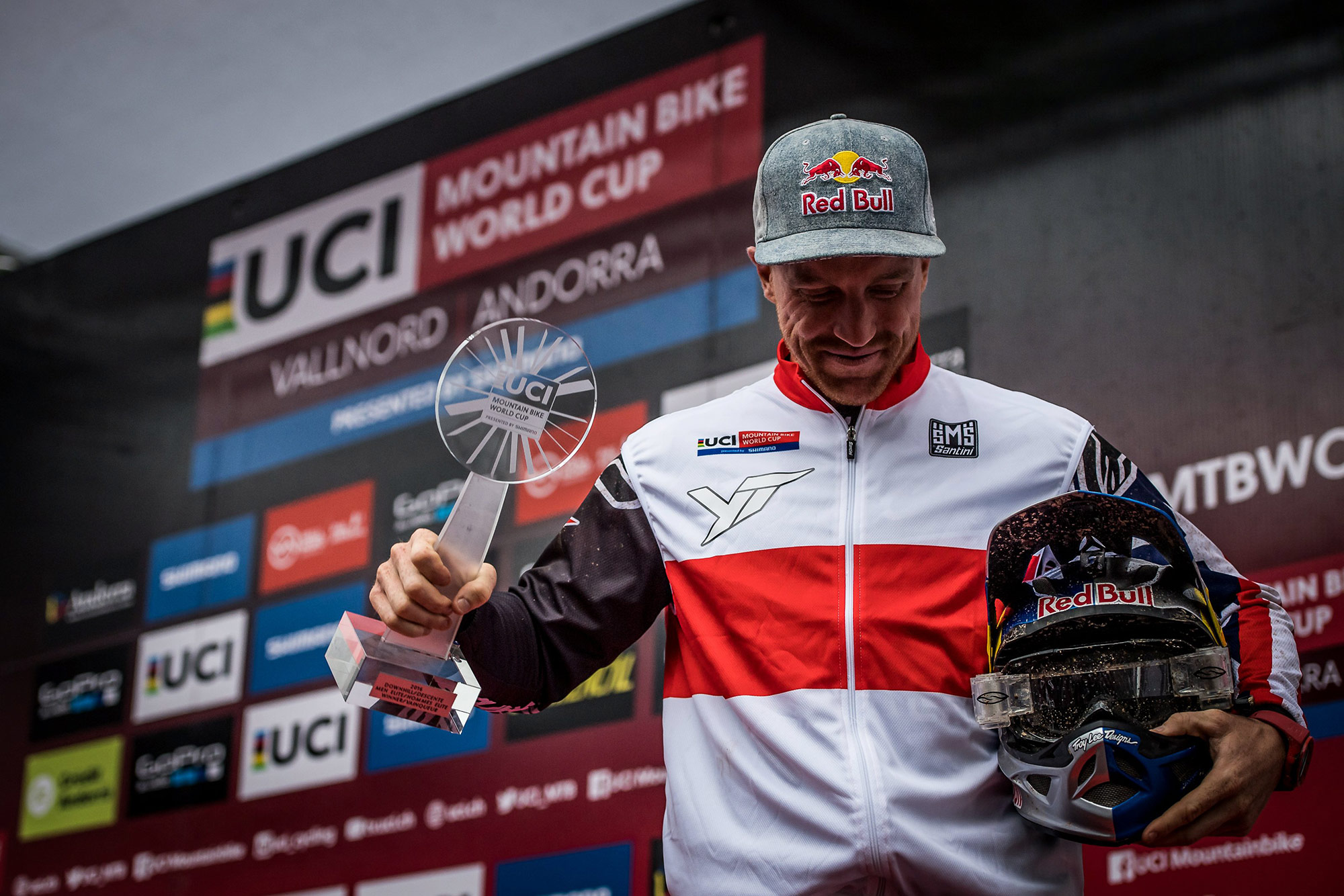 Aaron Gwin rolls into Val di Sole with four overall world cup titles to his name (2011, 2012, 2015 and 2016) but no trips to the podium in a downhill World Championship. At last year’s UCI Mountain Bike World Championships in Vallnord, Gwin was fresh from his overall World Cup victory but crashed in the forest and finished 74th. Despite missing three races due to injury, defending World Champion, Loic Bruni (FRA), still finished an amazing 6th place in this year’s points race. Last year in Val di Sole, Bruni, a steady second place finisher, had a spectacular run and was about to claim his first World Cup victory of the 2015 season when Gwin snatched it away. Gwin had already claimed the 2015 overall title and simply needed to finish the race in the top 30, instead he came on strong and shaved 1.159 seconds off Bruni’s seemingly unbeatable hot seat time. 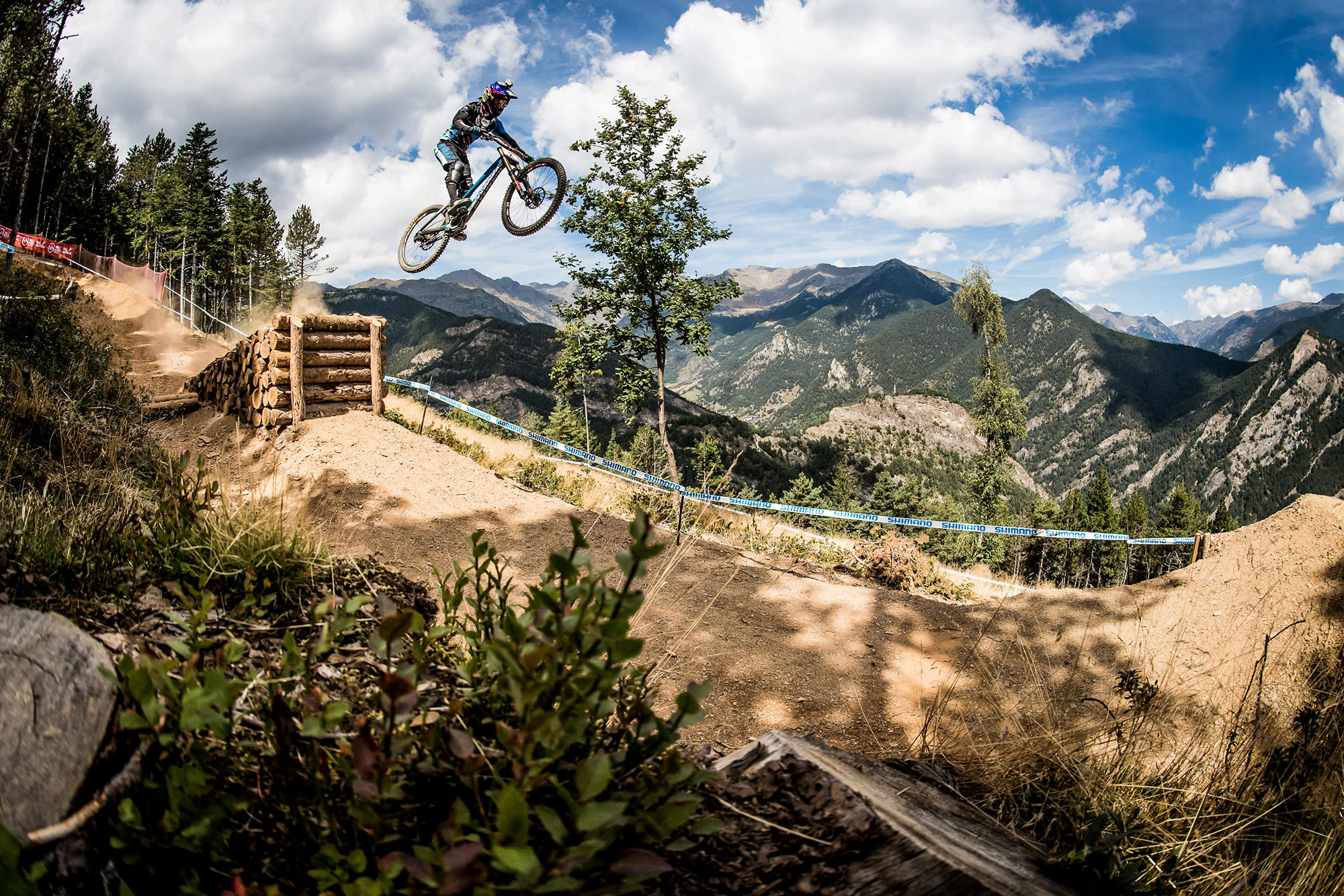 Last week in Vallnord, Gwin was in the same position; the overall title was essentially his going into the race. All he needed to do was finish the course in case Danny Hart (GBR), #2 in the points race, won his third consecutive World Cup race. Gwin played it safe to claim his second consecutive overall title, finishing 55th. By preventing injury and reserving his energy, he’s ready to make his best ever run at a World Championship. With three back-to-back World Cup wins, Hart has the most momentum going in, but the tough Italian course kept him at bay last year when he crashed hard early on and finished 25th.

UCI MTB WORLD CUP ON RED BULL TV
1148 riders on 129 teams representing 55 nations will participate this year as millions of spectators cheer in person and around the world (not all riders/teams/countries participate at every event). All UCI XCO (Cross Country) and DHI (downhill) events on Red Bull TV are delivered through a globally unrivalled combination of live and VOD programming that’s available to fans anytime, anywhere.

Red Bull TV will air the UCI Mountain Bike World Championships live – online and on mobile via Android, iOS and Windows Phone, as well as on selected partners’ platforms such as Apple TV, Xbox 360, Playstation 3+4, Amazon Fire TV (US), Chromecast and as a pre-installed channel on Samsung Smart TVs (2011+) in 194 countries.