Following past footsteps we open 2010’s events calendar with the Aaron Memorial in Alleghe (Belluno). Now in its fifth edition, it celebrates the memory of Aaron Shoemaker and is one of the must-see events of the opening season. For the regulars this memorial is a chance to meet and catch up but for many it is also synonymous with just chilling and riding on world class facilities.

Fighting bizarre weather conditions, Alleghe Superpark‘s crew managed to partially open at the end of December with a new range of box and rails by A[S]parks. Due to the inclement weather, even the memorial was postponed by several days and finally getting approval to be held on January 5th and 6th.

After days of waiting out the weather we decided to go enjoy the snow on Tuesday, January 5th and ending the day by heading to the hotel – home base for riders and other participants – towards evening. Some took advantage of the time to get in a few hours of training and shooting…trying to get confidence with the kickers. 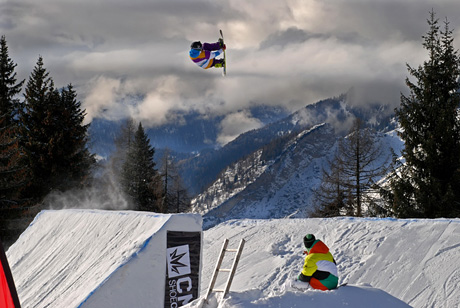 Besides the memorial the other big occassion this year was the celebration of the Superpark’s 10 year anniversary. Needless to say, the next morning we trudged towards the runs in a sleepy stupor.

As for the contest, the format was the same. One hour jam session over two jumps: a 6-8 meter ramp with a nice steep landing for the run-up to the mega fun box…a 15 m take off point with a 4 m high kicker.

Among the riders battling it out were Drake‘s Mauro Bisol, Matteo Zappaterra and Matteo Meneghetti. From the sudtirol region, Daniel “Plazy” Neulichedl and Marco “Bambi” Concin, winner of the last two editions. A large presence was also noted of the Roiality team with Marco “Markino” Grigis, Ruggero Naccari, Matteo Noire and Filiberto Piller Cottrer. Among the skiers, it was the hometown team who constituted the lion’s share of participants with Nico Corazza, Mattia Fabrinetti, Damiano Miari Fulcis, Simone Canal, the veteran Marek De Biasio and Dimitri “Dima” Sartor from Sappada. 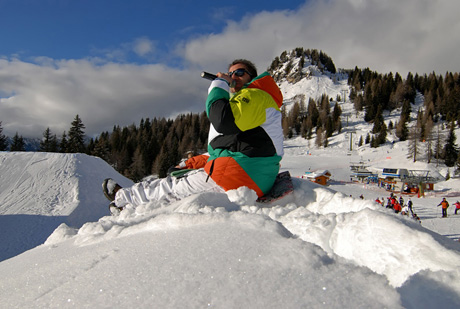 Presentations aside, the most impressive performance in the first half hour belonged to Ruggero Naccari: very stylish with some nice FS7’s but unfortunately (for him) he doesn’t turn on the first kicker and never closes the 900. One guy who did close a nice FS7, however, was Zappaterra. Not to be outdone, Filiberto Piller Cottrer (last season’s best rookie at the Red Bull Kratters Kamp) did not sit back and watch, closing a series of 720’s and 900’s.

The second half of the contest saw a diminishment in form. Taking the reins and keeping the spirits high were the skiers with their “diving” contest. The series of flips was begun by Mattia Fabrinetti (who later paired up with Canal for a doubles jump executing both a frontflip and a backflip) and followed by a group of youngers (class of 89-91) whose high point was Nico Corazza’s double frontflip.

A lot of falls and too many tricks not closed characterized the competition and the riders had a lot of trouble gaining confidence with the kicker, a difficult structure with a tooth that launched the contestants very high. If it was difficult for them to perform, it was equally hard for the jury to evaluate them. In the end, the winner of the guitar – symbolic award of the Aaron Memorial – was Marco Grigis. The fifteen year old from Corvara was the most deserving thanks to his precision and continuity. 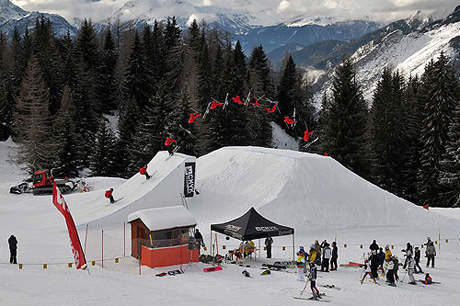 Thanks to: Rezza, Andrix and Alvaro. Here are the next events on tap at the Alleghe Superpark: