While the days are getting darker and many bikes are collecting dust in various cellars, Vienna is already preparing for the opening event of the FMB World Tour and absolute highlight of the ARGUS Bike Festival. For the 6th time coming April, the world’s best mountain bike dirt jumpers of more than 15 nations are expected to flock to the city hall square for the Vienna Air King – this time with a completely new course layout.

This year, the ARGUS Bike Festival attracted almost 100,000 visitors to Austria’s capital. This impressive number makes it one of Europe’s largest bike events and the industry’s well-established kick-off event for the new season. In 2011, more than 50 riders will once again try to secure part of the prize money. The 2010 competition saw Sam Pilgrim (GB/ 1. Place) and Martin Söderström (SWE/ 2. Place) in a head to head battle for first place, with Pilgrim coming out on top. 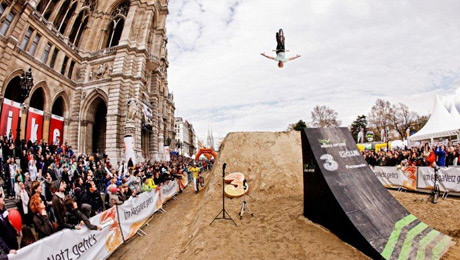 A novelty of 2011 is the course layout: You’ll find the legendary wooden launch pad featuring a high drop right in front of the city hall tower. A step-down, three massive dirt jumps and a step-up/step-down await in the direction of the city ring/theater. For the first time, the new course orientation features an overall incline enabling the riders to gather more speed and do even higher jumps.

The Vienna Air King is just one of the attractions on the weekend of April 2nd and 3rd. The ARGUS Bike Festival features numerous booths of the most important bike brands and destinations. Bike fans can wander around the large exhibition area and check out bike industry’s newest trends and products of 2011. In short: On the first weekend of April, Vienna is the place to be for all fans of mountain biking and outdoor sports. Anyone who wants to witness the battle for the pedestal live, should definitely make their way to Vienna coming April!