In less than a month, the 2012 mountain bike season will take off! And it starts with a real riding delicacy for all bike fans: The VIENNA AIR KING, in the heart of Vienna is once again the official kick-off event of the Freeride Mountain Bike World Tour.

Before a postcard scenery near the Burgtheater, the highlight of the ARGUS BIKE FESTIVAL welcomes the mountain bike dirt jump world elite from March 31st to April 1st. Well known names like Pilgrim, Reynolds, Söderström or Lacondeguy are all set on collecting important World Tour points right at the beginning of the season, in order to stake their claims on the FMB World Tour Champion title from the start.

Besides the FMB World Tour points and a generous overall prize money of 10,000 Euro, there are several other reasons for the best dirt riders in the world to come to the VIENNA AIR KING, at least 120.000 of them. That is the number of visitors who besieged Vienna’s city square last year and created a hell of an atmosphere.

The run for the starting places among the pre-qualifying riders underlines the high attractiveness of this event even further. During the application phase, more than twice as many candidates as the 50 riders who will actually ride in the pre-qualifyers applied for a chance to shine at the VIENNA AIR KING. 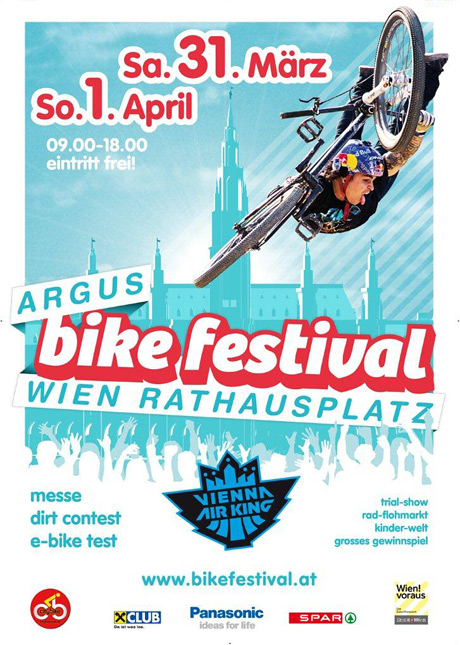 The set riders’ line up is once again filled with the top of the world’s dirt jump elite.

The set riders will start on Saturday, March 31st. At 2.00 pm the qualification runs for the finals begins. Each rider has two runs – only the best one counts – to convince the judges who is the real VIENNA AIR KING: From 30 qualifyers (the best 10 pre-qualifyers will also compete in the qualification round) only the best 12 riders will get a ticket for the finals that take place on Saturday, April 1st at 2.30 pm. The final’s modus comprises three runs, the average of the two best counts as final result.

The course is set before a picturesque view on the patriarchal Burgtheater and runs at a slight decline, enabling the riders to get some massive airtime. The starting tower is a good bit higher this year and leads the riders with a fat drop into the dirt line featuring three big doubles. All doubles are constructed with a wooden ramp and a dirt landing: the perfect mix for some awesome dirt action.

As a bonus, the most daring riders – we might spontaneously think of Andreu Lacondeguy – can showcase their skills at the Panasonic-Best-Trick Competition and win an extra prize money of 1,000 Euro and a Panasonic Full HD Camcorder HC-X909, worth about 1,000 Euro. In the light of this additional motivation, all visitors can expect outstanding crazy tricks and huge jumps at the VIENNA AIR KING.

At 9:00 pm, you can then witness the riders’ party skills. The official after-contest party takes place at the U4 club, in the Schönbrunner Straße 222. And anybody who has already participated in the after party, knows Vienna’s definition of partying. 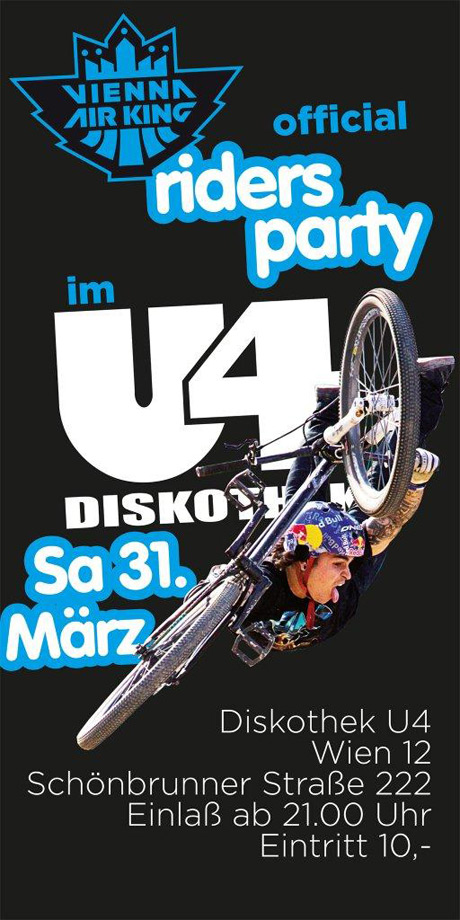 The ARGUS BIKE FESTIVAL, Austria’s biggest bike-event, located in the city centre of Vienna is the first must-see date of the season 2012. Anybody who wants to spot the newest trends of the year and see a great mountain bike show at once, should already make the weekend from March 31st to April 1st a red-letter date!

For more information visit the official homepage of the Vienna Air King: www.vienna-air-king.at