The White Style in Leogang turns into round eight – for the first time since its debut, this incredible event is an official FMB World Tour 2013 Silver Event. On February 1st 2013, 20 of the best slopestyle riders from around the world will compete for Leogang’s snow-champion title and collect their first world tour points in the new season.

We are all curious about how the heroes of the Freeride Mountain Bike World Tour spent their event-free time during the winter to prepare for the 2013 season. Can the British dominance from the past years be broken this year?
The last 3 White Style champions all came from the UK: 2010 and 2011 it was Sam Pilgrim and in 2012 it was Sam Reynolds who took the title back to the island. Reynolds is just back in the saddle after a long injury break and is highly motivated to defend his snow-champion title. He has already confirmed his participation for 2013.

Rising talents like Thomas Genon from Belgium, or Anton Thelander from Sweden are coming to Leogang to prevent another British victory. Martin Soderstrom, six times White Style participant, has been considered as one of the favorites for the title for the last few years. Martin is keen on bringing the victory back home to Sweden. More information about the rider’s schedule is coming soon!

The finals will take place on February 1st under the evening floodlights on Leogang’s Schanteilift. Be sure to highlight the White Style event date in your calendar – you won’t want to miss all the action! A White Style final is among the biggest, atmospheric moments in mountain biking. Every passionate mountain biker should witness its awesomeness at least once. 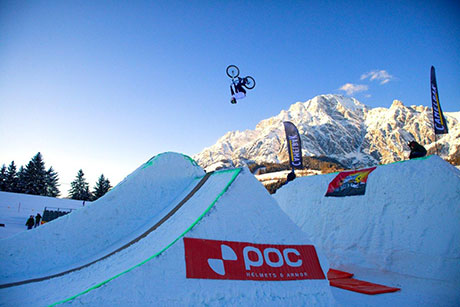 The media is also no stranger to the White Style competition. This magical event, which tests the bravery of every athlete attracts media coverage from around the world: In 2012 more than 40 journalists teams came from all over the world to report from the unique event on snow. The FMB World Tour Silver status and the 7,500 Euro prize money as well as the high-class rider line up, worth the participation! White Style 2013 is certainly the absolute mountain bike highlight, this winter.

The most important White Style ingredient is already waiting to be shredded: the winter snow. With currently more than 60 centimeters of fresh snow, the hosts from Bikepark Leogang do not have to worry about their most important raw material. They will need a lot – more than 2000 tons of snow was transported in 2012 to construct the huge jumps on the course. With White Style getting bigger and better every year, we can expect even more snow to be used in 2013!

All the White Style 2013 news can be found on the official Facebook Fanpage: www.facebook.com/White.Style.Leogang