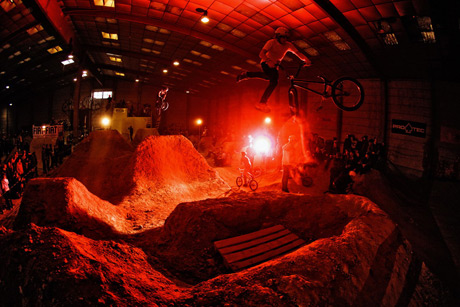 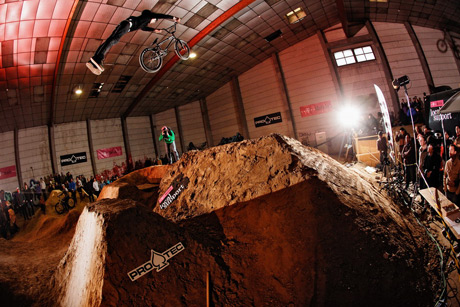 For many riders the indoor trails were the first possibility to ride on dirt in 2010. This chance and the new built setup were the reasons for many riders from Czech Republic, France, Austria, Poland and Switzerland to join the German dirt jump scene at the contest.

The pros blew it up with 360-doublewhips, frontflips and some flipwhips. Team „Fight for Mellowpark“ with Kevin Liehn and Sven „Sprosse“ Lehmann from Berlin took the win. Team „Pingoo“ with Yannik Granieri and Jean-Baptiste Peytavit came in second. So 3.500 € spot support will be used for the rebuilding of the Mellowpark, 500 € go to Lyon in France. 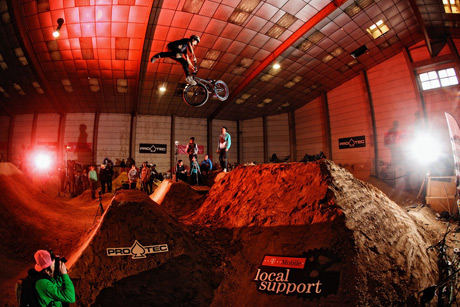 In the Am class Max Heidböhmer and Jan Lorfing (Team „Vennikler Radsportfreunde“) convinced the judges and took the 2.000 € spot support back to their home trails in Moers. Second place went to team „Fährt“ with Fjonn Dutzmann and Stefan Paul, team „Scheppern Musset“ with Eric Röhse and Max Kremer completed the podium. 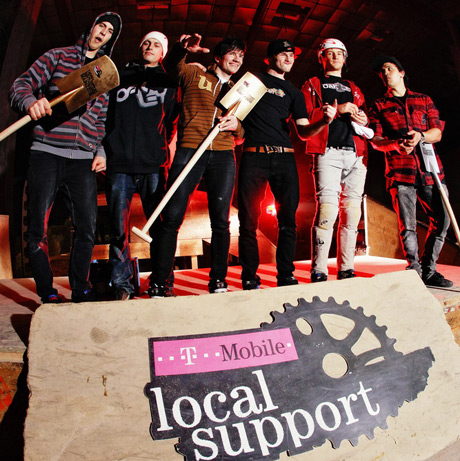 The T-Mobile Local Support Dirt Challenge was the qualification for the T-Mobile Extreme Playgrounds in Duisburg. Michael Beran (CZ), Jean-Baptiste Peytavit (F) and Sven „Sprosse“ Lehmann showed the best runs of the day and grabbed a ticket to ride for Duisburg. The T-Mobile wildcard for the best AM rider went to Heidböhmer. Those four are now starting in Duisburg side by side with guys like Ryan Guettler and Rob Darden.